Most participants in a course or workshop cringe when the words “role play” are pronounced. Next, they slink back into their chairs hoping not to be noticed. One such occasion comes to mind. During a Mindful Clinical Practice workshop, a mix of health care professionals were learning about communication stances, based on family therapist Satir’s model. Satir identified three elements of any interaction between two people (self, other, context) and four common, often unconscious, stances that people tend to adopt that leave out elements of the interaction. The part that is left out is indicated by shading in the diagrams below. The ideal way that is recommended when relating to another person is congruence, where all elements are included. Prior to enacting a role play, participants present a few examples of when they felt stuck in a clinical encounter. As the facilitator, I listen for a scenario that may work for teaching these stances. Usually it involves not only the patient and clinician, but also others, such as colleagues or family members important to depict the dynamics of the situation. 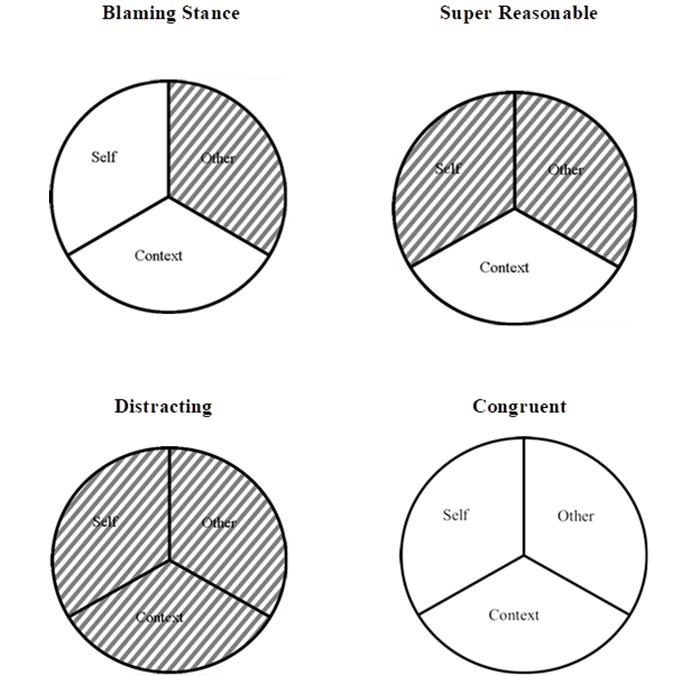 The doctor who chose to work through a situation was a family physician. She included a nurse and husband in the role play. Rather than play herself, she instructed another workshop participant to do so, enabling her to observe herself. What surprised me was that she brought up a situation that had occurred early in her career. She had made a mistake on a medication order that could have killed the patient. The nurse had noticed it in time, but temporary damage had been done. Knowing that she had injected the medication and fearing for her job security, the nurse took a blaming stance (“You wrote the order!”) while the young doctor, ashamed about the error, thought to herself, “How could I be so stupid?!” apologizing profusely, taking a placating stance. The scenario ran through the doctor’s mind, not only during that shift, but for years afterwards. The scene brought her to tears even though the patient survived. If both had been more congruent, they could have talked about what brought about the error (e.g. all-night shift, both tired and less able to focus), how written records are more difficult to read then electronic ones, etc. The husband had been shocked to see his wife non-responsive for several hours, so he too needed to be part of the process; explaining what happened and apologizing for the mistake. What was most interesting was the debriefing that took place after the role play. The psychologists in the room were caring and supportive in a way that the doctor was unaccustomed to. Unlike during some Morbidity and Mortality Rounds, the people in the room allowed space for her emotions. Tears were not viewed as a sign of weakness. The doctor was touched by their concern for her well-being. They did not blame or shame her. Rather, they approached it as an example of vicarious trauma. They helped her to accept that it is human to err. Two teaching tools are especially helpful for learning how to alter reactivity are the Triangle of Awareness and STOP, as they help the person choose a skilful way of dealing with a stressful situation or an interaction with another person. One becomes aware of how thoughts, emotions, and body sensations are connected; this insight allows one to change conditioned patterns. For example, a clinician may notice his fatigue, upset about working overtime, and thoughts how unfair the situation is. Consequently, he may understand how this could impact his attitudes and behaviours when working with a patient in a busy outpatient clinic. The person can use: STOP: S= slow down/stop; T=take a breath; O=observe (use the Triangle of Awareness for awareness of the self, the other and the context); P=proceed (respond rather than react). 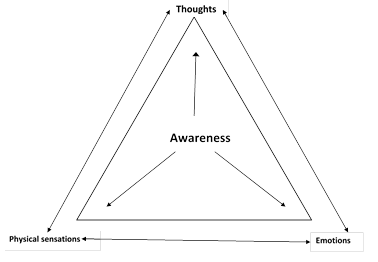 While teaching, the instructor models a nonjudgmental attitude and helps participants, who are often their own harsh critics, adopt a kinder attitude towards themselves and others. Most doctors and allied health care professionals maintain high standards, perfectionistic tendencies, and critical minds. This appears to be an advantage in their high stakes-high risk work environment but, these habits of mind may backfire when held too tightly and lead to emotional exhaustion and beliefs that they are not performing well enough – two aspects of burnout. Being mindful can offset those problems. 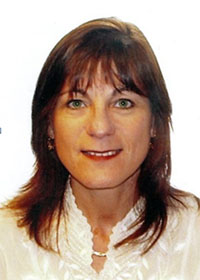